Pete Milne is a man on a mission – to help young people understand the climate crisis and show schools how they can take action quickly and effectively.

‘The past is your lesson, the present is your gift, the future is your motivation.’

Zig Ziglar’s famous saying could not be more relevant to the economic, social and environmental challenges facing us all, the most important of which is the issue of climate change. As the clock ticks in the far corners of the world, each day forward becomes more significant and the need to take action grows ever more pressing.

The theme for Earth Day 2022 was Invest In Our Planet – a call for governments, businesses and individuals to invest in a better future for the planet. Kathleen Rogers, President of Earthday.org suggests everyone has a part to play in this,

“Governments can pass regulations; they can promote a green economy. We need to invest in innovators and innovation, but we need to do it the right way.

We have to understand what’s standing in the way of change. A really powerful short video and interview with Adam McKay the director of ‘the 2021 satirical comedy Netflix feature, ‘Don’t Look Up’ lays bare the reality of our situation; mistrust and misinformation, the lack of a collective approach, a ‘business as usual’ attitude, ‘missing’ understanding and empathy, short term goals at the expense of future generations, political weakness, mismanagement . . .  and the list goes on.

Education has an absolutely critical role to moving us on and there certainly has been increasing commitment, urgency and legislation from individuals, educational institutions and governments. But so much more needs to be done. Now.

But first, the good news.

Since 2015 there has been an agreed international framework for taking the necessary action, commonly known as COP21. Cop 21 was in fact the 21st Congress of the Parties for the United Nations’ Framework Convention on Climate Change which took place in Paris and concluded with cheers, hugs and a general sense of euphoria. It was agreed by 195 nations to attempt to cut greenhouse gas emissions to a level that will limit the global average temperature to a rise “well below” 2C (3.6F) compared to pre-industrial levels.

These congresses continue to bring countries together, most recently in Glasgow in 2021 at ‘COP 26’. But it was in Paris that the most significant decisions of principle about climate change were made.

Following up COP 21 in schools

Now the less good news. The COP sequence is complex, often frustrating and needs to be understood by young people as soon as possible so they can influence how we move forward sooner rather than later.

One way for young people to develop insight and understanding is to take part in a movement for young people which is growing quickly and is specifically designed for this purpose: Beyond COP21. The central idea is to hold regular symposia at different schools around the world to explore and debate approaches to combat climate change. Although it is not a role-play event, Beyond COP21 plays a very similar role to the Model United Nations (MUN) movement with which many will already be familiar.

A movement whose time has come

During the pandemic, Beyond COP21 adapted and the symposium series continued to offer onsite, hybrid and virtual options. It has now grown to include over 30 partner schools, with the latest signup being Aiglon College in Switzerland, the 18th different country involved as a host.

The movement has grown significantly since its humble beginnings back in 2016.  Since then, symposia have been hosted in the UAE, UK, Jordan, Kuwait, Singapore, Kenya, Ghana, Taiwan, Peru, Spain and Vietnam, with future ones taking place in China, UK, USA, Canada, Georgia, Bahrain and Greece.

What happens at a Symposium?

In essence, the Beyond COP21 symposia contribute a key ingredient to the success of the post-Paris 2015 UN Climate Change Conference agenda by helping whole school communities understand the process of what needs to be done. Key decisions made at COP26 in Glasgow are also incorporated into the discussions.

Each event consists of themed high-impact presentations from and discussions with guest speakers about the UN’s ‘Agenda 2030 for Sustainable Development’ and the climate negotiations that have been taking place since 2015. Individuals & communities are invited to take action, make pledges and take part in a series of practical youth-led activities and workshops.

Local sustainable companies and organisations are also asked to showcase their initiatives related to the UN’s Sustainable Development Goals (SDGs) and engage with students throughout the day. One recent symposium took place in the UK at Lancing College during their Sustainability Week – you can get a feeling for what happened in this video:

Click here for a video/article about the Symposium and the Sustainability Week at Lancing College in March 2022.

As one symposium ends, another one is being organised. Using the ‘pass the baton’ idea, messages are recorded from one host school for the next, as shown at the beginning of the video. Conversations and interest continue to come from other schools across the world, from Malaysia to New Zealand, Chile to Thailand, Egypt to Ecuador and Luxembourg to Mexico!

Future developments for the movement 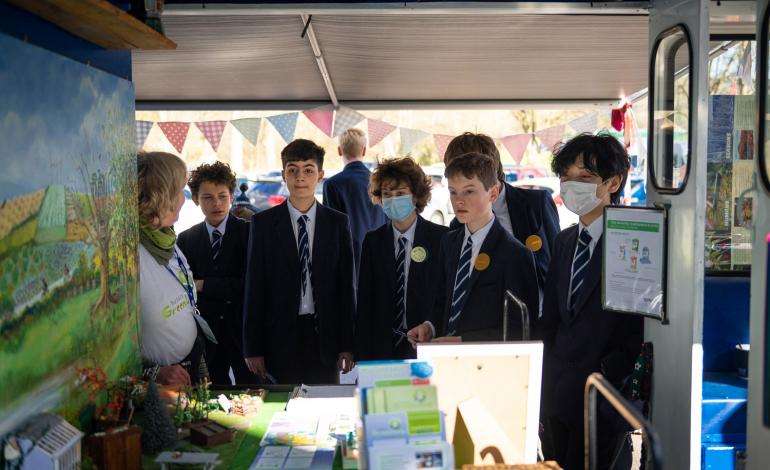 As the series continues to expand, partner schools are now in discussion about opportunities in which student ambassadors from each school can come together regularly to share their ideas and look for solutions to the climate crisis while supporting the SDGs. Individual schools are being connected with each other in the Symposium network and at the end of 2022, there will be an online forum involving student ambassadors meeting to share what their schools have been doing.

The plan is then for an annual conference to be offered onsite with an online option from 2023 organised by student ambassadors within the Beyond COP21 Symposium network.

I am really excited about how the Symposium series is moving forward. Even through the tough times, I knew it was something that had to continue to grow to give students a greater voice while also supporting local communities.

Pete Milne is the Founder and Director of Target4Green Educational Consultancy and Training Ltd., and the founder of Beyond COP21

For more information about becoming a host school, please see

Pete can be contacted at: peter@target4green.com

All images kindly provided by Pete