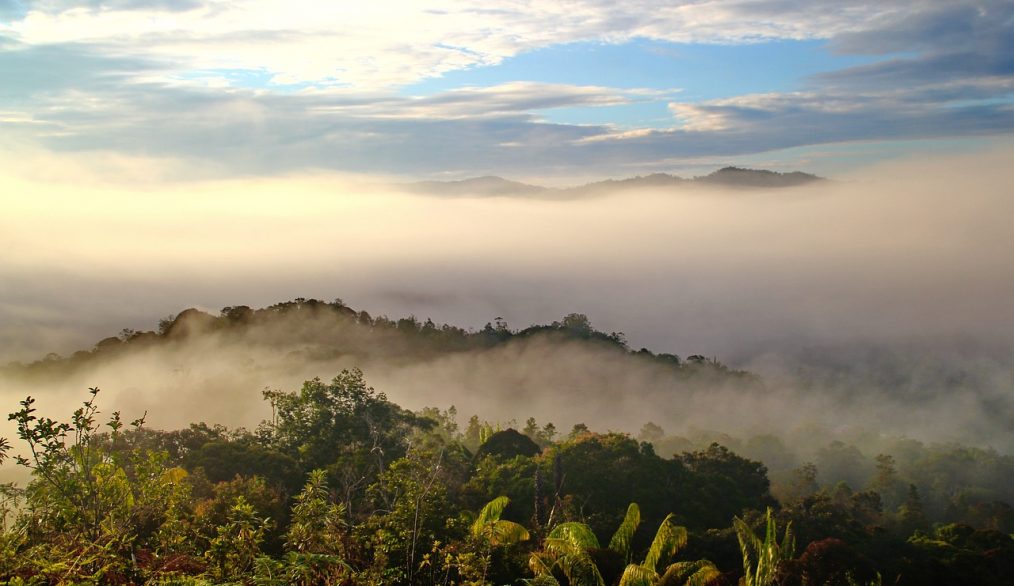 Hannah Rae spent 10 years working on a variety of educational projects in East Malaysia. This foraging expedition to the Borneo rainforest with Malaysian teenagers is a vivid memory.

Imagine yourself driving away from Kuching, Sarawak’s picturesque city centre. The road gets less congested as you carefully navigate one of the strangely massive roundabouts in the area, which seem to have been built as an experiment, as no one knows about priority or lane discipline. It’s all worth it, though as the sky opens up towards Matang Hill and you take in the relatively unspoilt scenery of shop houses dotted along the road, the occasional overcrowded motor scooter laden with a full family and various pop up – highly unregulated – fast food stands selling the standard nasi lamak, pisang cucur or state favourite kolok mee.

Around ten minutes and a turn to the left later, you come across a beautiful co-ed residential school, seated within the flat valley that neighbours Matang Hill with its pockets of primary rainforest, secluded jungle treks and a hidden Hindu temple. SM Sains Kuching was one of the schools I was working with in 2013. I had the task of improving the extra-curricular provision in this high performing Islamic school, famed for its academic achievement and co-curriculum prowess. To break the mould I decided to try the concept of ‘education outside the classroom’ and to help I roped in the sedately progressive assistant head teacher and an adventurous local personality known as ‘Matang Mike’.

Matang Mike lives in a self-built, rambling house which is completely invisible to the road and probably subject to dubious planning permission, as it is slap bang in the middle of the only public access to Matang Hill. After carrying out my risk assessment (Malaysian schools first?) and using every charm tactic in the book, we were granted permission and arranged for a party of 30 Year 10 students to assemble in Mike’s garden. Mike introduced us to the Orang Asli guides he had employed for the day. The objective: to safely explore the rainforest, learn about the terrain and forage for food to bring back to the house, prepare and then eat.

With a glint in his eye Mike decided there would be an ice breaker to start. After a run around Mike’s huge pond, students were put into pairs to carry out a number of trust exercises. We had lots of giggles as students let themselves fall back into the arms of their partners. Maybe surprisingly, no one was left to drop to the floor. Then it was all round hilarity as the students were introduced to wheelbarrow racing. We had more than a few faces ploughed into the ground as the competition stepped up. The high performing, somewhat conservative students were relaxing and enjoying their play, while our guides prepared their kit.

Timing a jungle trek so as not to be in the heat of the Malaysian sun is somewhat impossible. And this trek was primarily uphill. The girls were fully covered, wearing their Tudongs with a peaked cap propped on top. Most limbs on boys and girls fully covered – even so the mosquito repellent was applied very regularly and obviously we had lots of water to hand. These Malaysian-born students had never been in the rainforest previously, never completed a jungle trek and never explored the natural environment that is on their doorstep. preferring to stay cool and trek the aisles of the local air conditioned shopping mall.

Enthusiasm was high as blood was pumping following the ice breakers. The students were safely in groups – with good ratios of student to professional – and so we set off up the track. The guides were from the Iban indigenous tribe, their ancestors are the famed Borneo ‘Headhunters’. Something I love about East Malaysian Borneo is that the ancestry of all indigenous tribes is celebrated hard and often. People are proud of their (eco) warrior roots.

Schools sound out regularly with traditional instruments such as Sape and Kompang. Students learn and perform cultural dances and songs and as is common throughout the whole of Malaysia, they eat the food that is traditional to their tribal line. What is less celebrated and being lost however, are some of the traditional and cultural skills held by the ancestors, like recognising and taking food from nature to sustain and heal yourself and others. This was the learning outside the classroom that we focussed on up Matang Hill.

The trek itself went well. We explored and we learned. We reached the Hindu temple and respected the sacred space. We respected immense natural beauty as we reached the top of the hill – without complaint or injury. The groups were able to choose whether they wanted to challenge themselves by leaving the track to go into sublime primary rainforest and we all did…

The sounds of the rainforest are unforgettable; simultaneously terrifying in their proximity and awesome. Like the high pitched rattling scream that raised the alarm as the volume rose, giving you a sense that something huge and collected in a swarm was around the next turn. In fact it was the tiny Cicada, less than the size of a matchbox, stuck to the side of the tree calling out.
We spotted creatures. Elephant ants with huge limbs like blackberry beads, red ants in a swarm that would burn like fire if they swamped your feet; still lizards that would fly from tree to tree when disturbed, huge monitor lizards that would calmly track like tanks towards water to escape us and spiders the size of a man’s hand with a ‘don’t touch me’ red cigar shaped body (not included in the risk assessment) 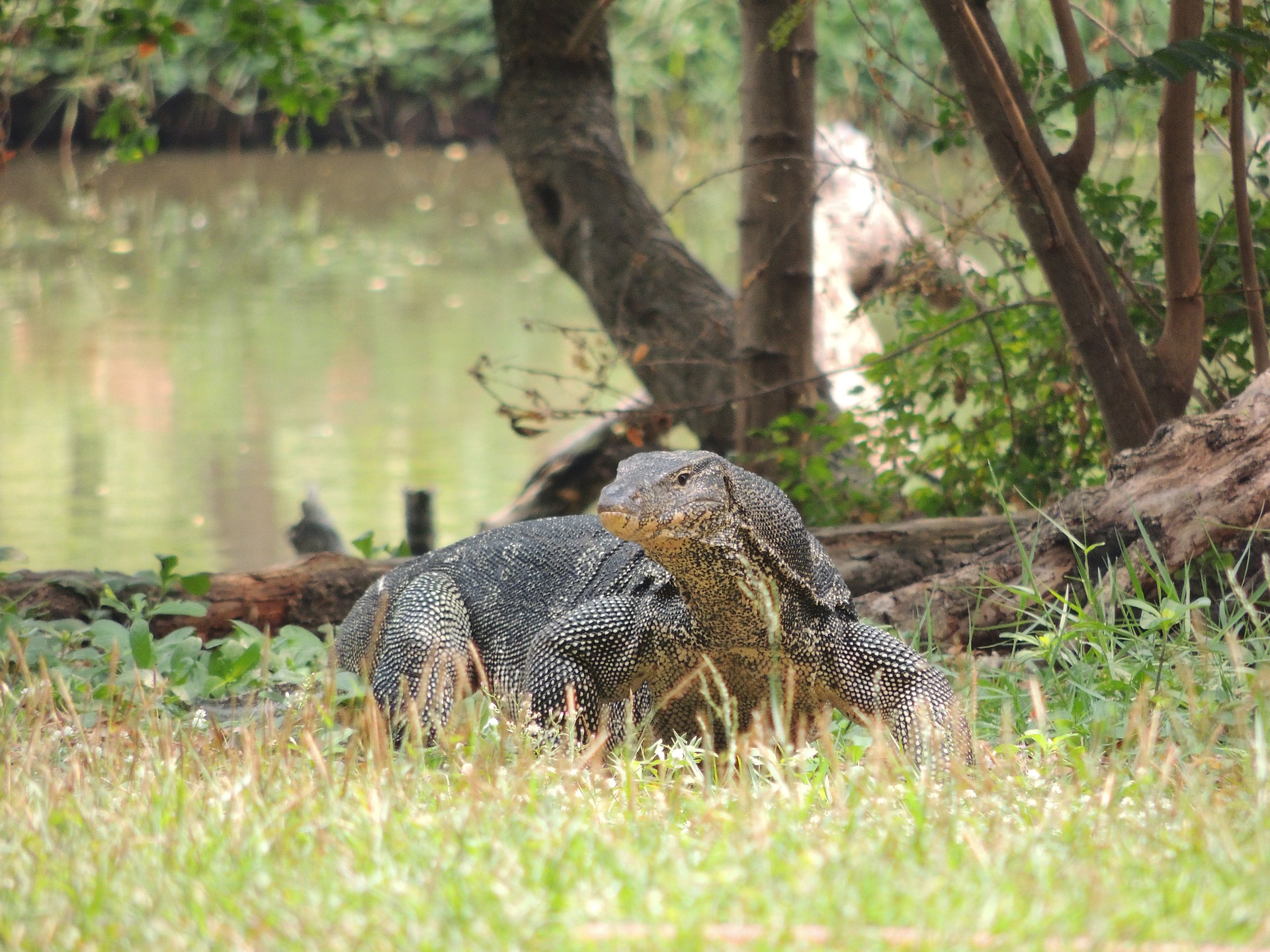 Education outside the classroom

We learned about food plants, medicinal plants, crafty plants and poisonous plants. We picked herbs, plants, salad leaves and lots of Midin, a jungle fern that is delicious fried with wild garlic. In a culturally appropriate gender move the boys learned about a weird, somewhat poisonous and to be avoided plant called ‘Dog’s Dick.’ The girls were spared this detail.

We returned to perhaps the most enviable house and garden I have ever encountered. In a twist of cultural gender norms, the boys took over the preparation and cooking of the foraged food and it was at once delicious and exciting to eat the food we had learned about, identified, picked, washed and prepared – FOC (free of charge) as Malaysians like to say. So ended one of my most memorable days from my 10 years in Malaysia, I hope my group of 30 students hold the memory dear too. Matang Mike and I worked together over several years and he still has the best setting for a house, ever.

Hannah Rae is a wife and mother to 3 daughters. She is a youth centered educationalist, Guidance Coach and newly fledged teacher of Yoga.

Find out more about Hannah and her work from her LinkedIn page:

Feature Image by labanglonghouse from Pixabay

Support Image by ekaphant_s from Pixabay 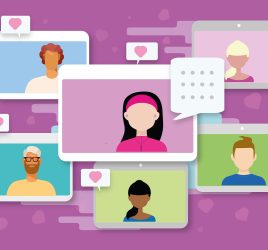