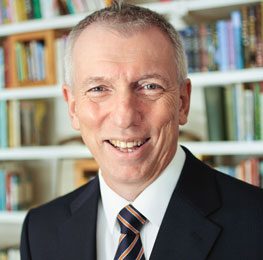 In a career of forty years, Andy has worked in some of the most prominent international schools in the world both as a teacher and leader. Having graduated with a degree in Modern History from Oxford, where he also trained as a teacher, he worked in the UK before starting his international career at Island School in Hong Kong.

His subsequent career as a school leader specialising in school expansion and foundation projects began when he was appointed as the Head of Secondary School at the British School, Jakarta. After the construction of a new campus at Bintaro Jaya, he was appointed to his first Headship as Director of the Alice Smith School in Kuala Lumpur, where he led the team opening the school’s new Equine Park Campus. Headships followed at Enka Schools in Istanbul, Bangkok Patana School and then in Dubai with Taaleem LLC in the UAE, as Principal of Dubai British School and founding Principal of Jumeira Baccalaureate School.

Andy took his Master’s degree in Education at the University of Western Australia, specialising in curriculum design and the leadership of change. In 2016, he was awarded the Professional Diploma in Digital Marketing by the Digital Marketing Institute. Recent work with Consilium Education has included educational advisory work for the design of new schools in Saudi Arabia, writing feasibility studies for projects in Japan, Russia and Latvia, start-up recruitment for a new British international school in China, ongoing school improvement services and school design for an educational group in Dhaka, Bangladesh and a communications analysis study for a leading international school in Havana, Cuba.